The Kaw Point Connector Trail Project in Kansas City earned a 2018 National Recognition Award in the American Council of Engineering Companies (ACEC) Engineering Excellence Awards Competition. Phillips Hardy completed a portion of the project by constructing the new pedestrian and bicycle paths at the Kaw Point Connector. The new paths link the historic Kaw Point Park to trail users across the metropolitan region in both Kansas and Missouri. The project is considered to be the hub of the trail system in the metro area and will boost the local economy through the increased use by trail enthusiasts. Our team takes pride in the work we do on a project like this because we know how much it can positively impact the community. 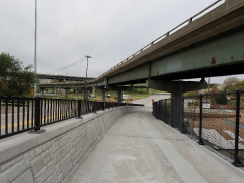